I could hardly suppress my amusement as I stood in the Hallmark card aisle and shamelessly eavesdropped on a phone conversation the young man next to me was having. He kept pulling out cards, replacing them impatiently, talking to his friend, “So how much would that cost? Eighty bucks??? I don’t have that much with me!” There was a pause while his friend gave him further advice and he restlessly plucked out more cards and replaced them. “Look,” he said, “I have only been going out with her for five months. I don’t want to be all smarmy. And I only have like thirty dollars on me.”

At this point I had an urge to pat him on the head reassuringly. He was shorter than me. No joke. But he had a little beard, so I didn’t think I was old enough or he young enough for me to tell him what I was thinking, “It will be easier when you have found her, Sonny. When you have walked life together for a while and you know she hates coconut candies and loves vanilla anything at all.”

It’s hard to define love. Lots of people have done it well. I will just aim at one of my lists here. Love does things. Things like

There. I wasn’t too smarmy, was I? 😉 There used to be these little gum packs with “Love is…” cartoons in them. I thought they were cute and terribly cheesy. But there was a lot of truth. Sometimes love really is a phone call in the middle of the day, just to say hi. There is so much ordinary life that fans the love affair of a good marriage. Gabe says his friends at work tease him about his lunches because they know I pack them, and I pack the best lunches I can because I love him. Somehow it all ties together, if you get what I mean. I want everybody in the world to see that this is my man and we intend to stay together all of our lives. Why not expend my energies to make it a pleasant journey?

And now, because one cannot have too much Pride and Prejudice: 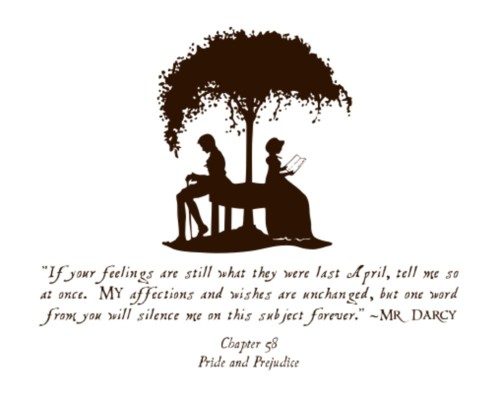