Queen, the lop-eared rabbit with the patchy springtime fur, was a little surprised when Rita offered her, instead of the daily pile of dandelions, a very overripe banana. It was a “let’s see if the rabbit will eat this” experiment. She delighted us by chowing down the peelings, leaving the fruit until last. Queen is lonely. She eats dandelions endlessly, just for the pleasure of company outside the cage. We plan to find her a boyfriend so she can belong to a family.

Last week I bleached all my baby broccoli plants in a sincere attempt at protecting them from the elements. Folks, it got cold as anything so I lovingly set buckets and quart jars over all the plants. Apparently the sun was bright enough to heat it up to cooking temps inside the jars and that was the end of the windowsill starters.  I went to the green house this morning and at first I thought my old-order Mennonite greenhouse lady was sold out of broccoli. All I could find was purple cabbages and cauliflower. Score on purple cabbage. I love it.But not cooked. It looks sicky grayish then. Anyway, I stumbled upon some really little broccoli plants being coddled in a corner and brought them home with me because the lady sells out of broccoli every year, and I think to myself, “Why wouldn’t you learn that you need twice as much?” Of course, I don’t say it, because she has been greenhousing for 25 years and if she wants to run out of plants, that is her business. This morning she was telling me her new scheme of lining her planters with Depends under the soil to keep them from drying out. It’s brilliant, wouldn’t you say? 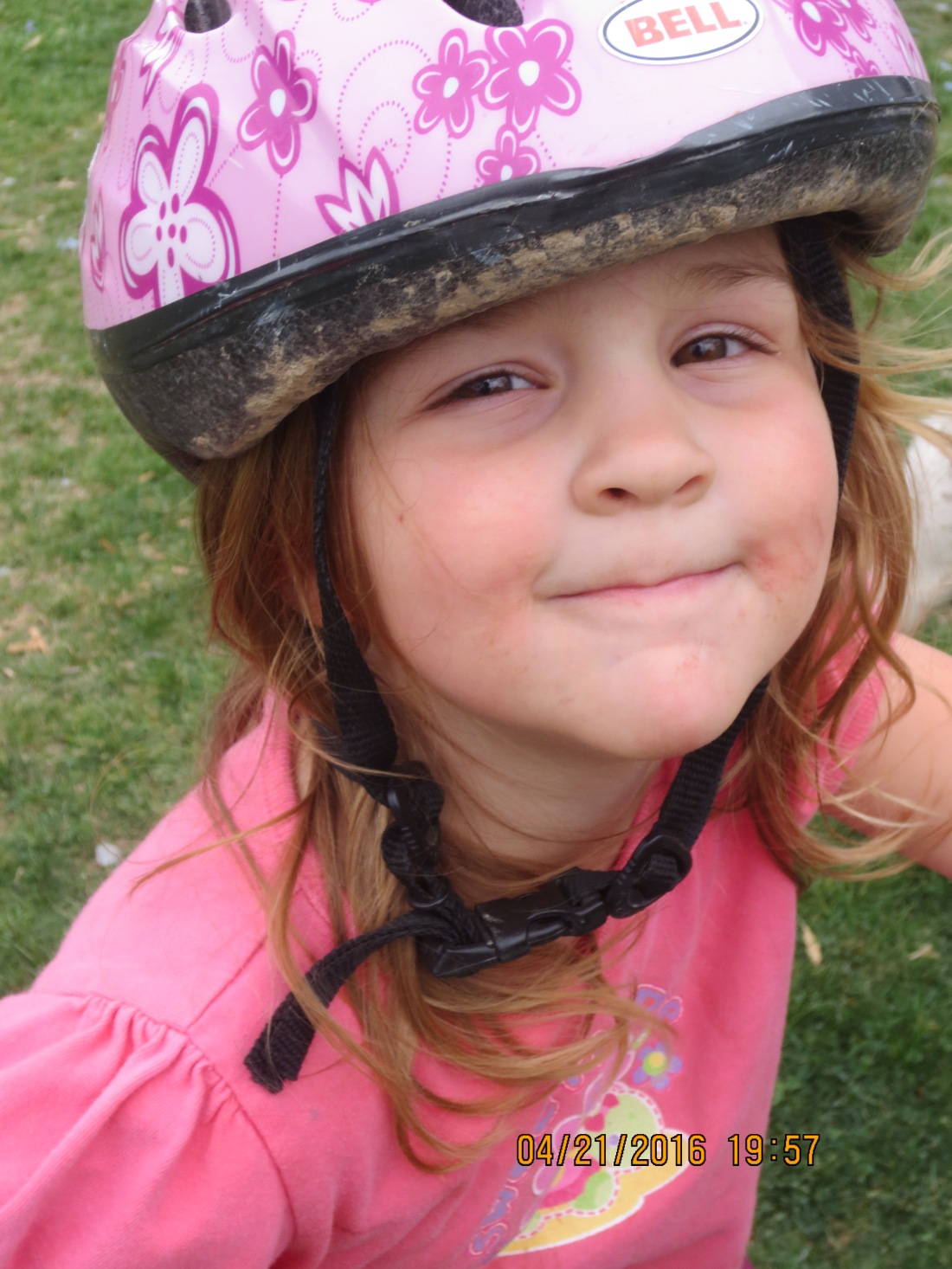 Our baby learned to ride her bike solo tonight. As you can see, she felt mighty pleased with the accomplishment. Someone dug an old helmet out of a muddy spot and she wore it with pride. If you would like to see a short video of her efforts, with an amused mother giggling in the background, click here.  After her first successful wobble across the lawn, she rushed to her sister with a mighty hug and said, “Tell all my friends I can ride a bike, will you? Tell Anicia and Kiersten and Gretchen and Jenna and Allison.” I might mention that the child will definitely be needing a proper helmet. She is as accident prone as anyone I have ever seen, sporting bandaids and bruises year round.

Today is my dad’s birthday. Every day we have discussions about how soon Rita will be 7 and what about Addy turning 5 and what shall we give Doddy for his birthday. After a small tiff this afternoon, Rita said, “I know what. Let’s give Addy to Doddy for his birthday and then we can babysit her when he goes to Florida.” Addy thought that would be fun. She was seeing an endless vista of marshmallow peeps and Tom and Jerry episodes. But Rita changed her mind, “That would be giving away the present God gave us and that wouldn’t be right.” I thought that put it rather well.

This forenoon I was working on assignments for the last 10 days of school. After lunch I took a break, looked around at my house and realized in a sudden fit of depression that every single room feels grubby and tired from much occupation over winter. I was standing in the kitchen, looking up at the ceiling, wishing for someone to just tell me where to start when I saw the cobwebs above the curtains. So there I was, and there was the thing to do, and I just did it. After I scrubbed down the walls and shined the windows, I looked around and felt real good. One room down, five to go. I wonder if I can pull it off- get my house shined up before we finish school so that I can do my annual Week of Loafing without any guilt. I aim to try!

How about you? Have you made any interesting discoveries lately?

8 thoughts on “Rabbits Like Bananas, and Other Who Knew? Moments”