I thought about beauty quite a bit recently, seeing as this is a subject that interests us all. I may have implied in my post that I disdain all fashion, and I have to confess, that is not true. My ideas of what is attractive are very influenced by what I have been taught as a Mennonite, I know that. But I don’t live under a rock, and like all of us, I like to feel pulled together, not frumpy and straggly. That latter feeling makes it very hard to be pleasant. It is on the opposite end of the modesty spectrum, so far out as to be highly noticeable. So yes, I do care about how I look and I notice how other people look. I have a little story to illustrate what I was trying to say:

At a recent event, I noticed a lady in front of me who was strikingly beautiful. She had long, flowing, silver hair and flawless skin without even crow’s feet around the eyes. Although she looked to be 55 or 60, there was no trace of extra chin or flappy arms. She wasn’t skinny or unnatural, just exceedingly well preserved and as poised as royalty. When her husband showed up with two water bottles and a soft pretzel, I watched her reaction and observed with sudden clarity that no crow’s feet= no sense of humor. He gave her the water, but she seemed only to see the pretzel and narrowed her eyes with the merest hint of disapproval. He chuckled a bit nervously and made excuses for his lack of appropriate food choices. She said nothing, just looked at him without any expression except mild scorn. He offered her some pretzel and she turned away. At this point I wanted to say, “But he brought you nice, cold, bottled water! You could at least thank him.” Of course, I didn’t. I looked at that lovely profile and I didn’t think it was beautiful anymore. Her husband ate his pretzel with the nonchalance of a naughty little boy, then got up and left. I didn’t blame him.

So here’s the thing. If you had everything you wanted, could people stand you? I have a theory that very beautiful people tend to get away with more brattiness in life because somehow we excuse them for bad behavior. It’s called the “halo effect”. I googled it and found it quite interesting. It’s why pretty little simpletons get married to rich men with hardly any skills other than giggling. (edit: the rich men don’t giggle. That’s the girl’s job.) It’s also why overly-confident, handsome boys get hired for jobs that they are not even competent at. Gah. The injustice! So anyway, here’s to looking deeper than skin.

Here’s story two. I heard such an inspiring thought this morning. “If you are raising a family, you are doing building work, and your home should resemble a construction zone. Don’t even try for a museum.”

Wow! That’s so true, I thought. I won’t forget that one. Then the day happened. Before supper I asked the girls to clean up the living room, since obviously they needed something to do because they were not outside in the gorgeousness that is our September. They did, and I rewarded them with tiny bits of food for a doll party on the deck before I set to pulling weeds. All day I have had a terribly painful sore on my tongue that seems to have started from eating too many tomato slices a few days ago. I could hardly talk and even drinking water made my eyes smart. Pain can make one feel ugly too, so I removed myself from society and went to the garden to set my little strawberry plants free from their weedy competition until it got too dark to see.

When I returned to the house, there they were, listening to “Little Men” on audio and the house in shambles. Again. There was a teetering pile of folded laundry that just hadn’t made it to drawers, mixed with every kind of project five active little bodies can think up, including a freshly painted plastic bucket and some sticky apple schnitzes on the computer desk. And the dishes weren’t done. I did not even once think about the museum/construction zone quote. “You guys have got. to. own. your. messes!” I said emphatically. It was bad, on the scale of messes about at Rubble but not yet at Disaster. In retrospect, it could have been a lot worse when I considered the tube of super glue on the floor, as well as a cider jug that seemed to have been the refreshment of choice. They sheepishly looked around and said, “What do you mean? You didn’t give us any instructions,” but they knew quite well and scurried around picking perler beads out of the frizzies of the carpet and putting paper snibbles into the trashcan and dishes into the dishwasher. It was probably a good thing that my tongue was too sore to say much. As I cleaned the dirt out of my fingernails (without benefit of a nailbrush, which is AWOL, probably being used on a dolly’s mop) and washed my sweaty hair, I thought about the construction zone and my fuss.

The Proverbs 31 woman speaks with “the law of kindness”. I do so aspire to be like her and it seems God is very interested in giving me lots of practice. I need to learn as much as my children to own my messes, so we had a quieter, kinder talk, and thus ended the day.

It’s still a good quote. I shall repeat it as my watchword when I work through Saturday. Anybody joining me?

Here it is again, so you don’t have to scroll back up. 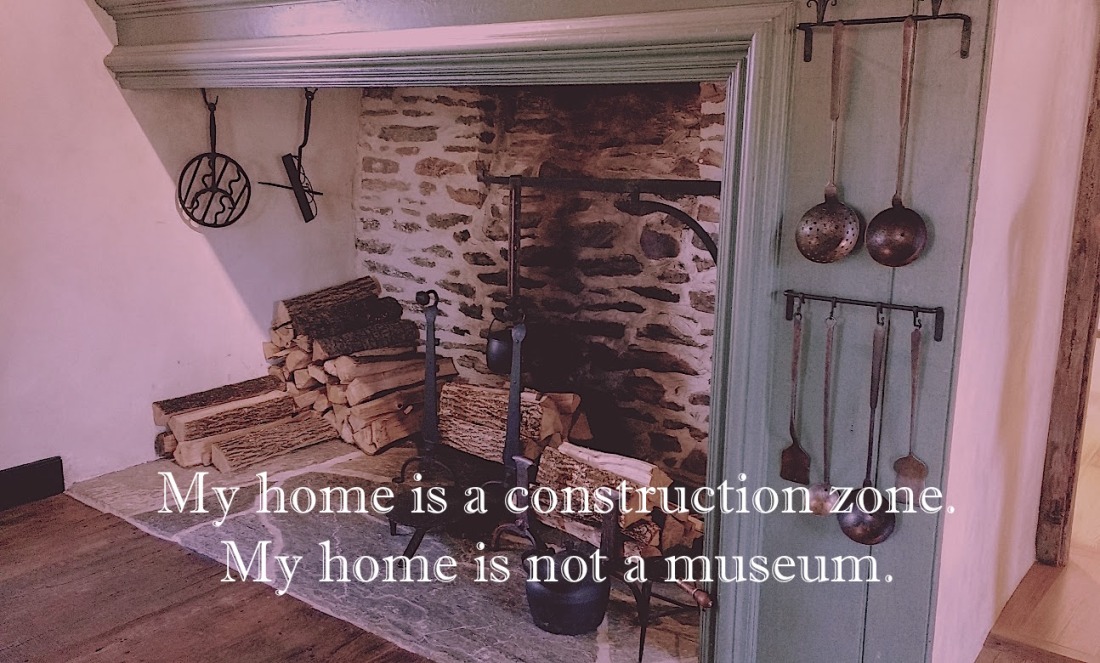 3 thoughts on “The Milk of Human Kindness”