I looked at the calendar recently and thought, “What have I been doing?” I can tell you what I haven’t been doing pretty easily. I haven’t been sitting around reading a lot and I haven’t been writing. I can honestly say that I missed the writing bit pretty much every day. One sentence in a diary doesn’t scratch the itch at all. I sat around just enough so that I wouldn’t miss it too severly. Haha.

We had days and days and days of rain in late September. It was cold and the dog stank and there was mud in our classroom every day. I started burning candles and plugged in air fresheners.

During the long wet I sewed dresses for the little girls so that we could coordinate somewhat for a family photo shoot. Then I spent a ridiculous amount of time trying to figure out what I would wear to coordinate with everybody else. Shall I just admit that I got three sweaters at Boscov’s so that Gabe could help me figure out which one to wear because I really just don’t have a good sense for that sort of thing? And that, of course, I wore the simplest, most unassuming one and took the other two back? At the last minute I decided not to wear the charcoal skirt after all, but the grey dress. Why was that decision so hard to make in the store? I did not consult Pinterest, which is what other people do when they can’t figure out what to wear, because I don’t get along well on Pinterest. ‘Nough said.

We had an anniversary, our 14th, and it was the first sunny day after all that drear. I dug out our love letters and we read a bunch of them, laughing a bit at ourselves, reminiscing and agreeing that 14 years has taught us a few things about loving each other, even though sometimes we lose track and forget to appreciate the one we love. Which is why we took a day off and went biking Rails to Trails without the children. No eavesdroppers in the vehicle! And just for a day it was nice not to have to settle any fights or wait for the slow ones. We ended the day with dressing up for a fancy meal out, then descended gratefully back into normal life. After all, back in the day when we had dates every weekend, we yearned to live normal life together, more than anything. And here we are, doing it!

Gabe has lived with me long enough to know the kinds of books I love. For our anniversary he got me blink (you have no idea how hard it is for me to write a book title with a lower case letter) by Malcolm Gladwell, subtitled “The Power of Thinking Without Thinking”. It is packed with insights into what makes people decide things: those split second impressions that affect our choices. For the first week or so after he gave me the book I only had time to stroke the cover, but by now I have read enough to know it is just as interesting as The Tipping Point, which I discovered a few years ago.

Once the weather turned clement (is that right? the opposite of inclement?) our friend Michelle Fisher took the photos. I knew she had lots of experience in posing children because she has nine of them and they always end up with really sweet family pictures. Want to see a few? I think you will agree that she did a good job on them. When these were taken, the children were 12, 10, 8, 6, and 4. This only lasted for one month, but it was kind of fun to say. 🙂 The 10 turned 11 yesterday. 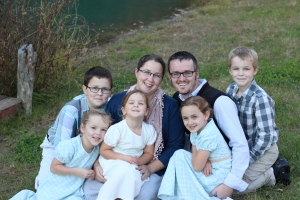 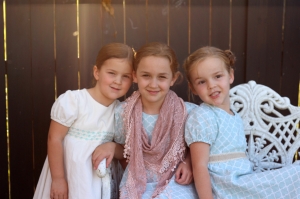 My friend Caroline and I spent a forenoon together, picking up a large meat order about an hour’s drive away. Either one of us could have gone alone, but it just so worked out that we could team up. I was supposed to be the navigator, since we didn’t have GPS. Even with a Google Maps printout, I stink at navigating. Let’s just say we saw a lot of beautiful countryside and enjoyed our extra time to visit. It was nice to be with someone who didn’t get uptight about the unmarked roads and was game to try routes that appeared to go in the right direction. Not to mention someone who didn’t run out of interesting topics of conversation, especially with no eavesdroppers in the van. 😀

The next day I texted her that I had just been running some errands in a nearby town and had to turn around three times, so I think I do need a GPS because of all the stuff in my head that isn’t down on the earth. She replied, “Well, I just read, ‘Set your affections on things above, not on things on the earth.’ With that mindset you might lose your way driving every now and then.” She is witty like that. The thing is, I am pretty sure I was thinking about that meat we hauled home and how it needed to be canned, as well as these apples I am picking up and how they also need to be canned.

I have 2 1/2 bushels of apples still sitting on the front porch and some frozen tomatoes that I have to process and after that I put my foot down. No more! Today I tilled the gardens one final time and sowed a cover crop of rye. I love summer so much, but at this point it is only sensible to move on, wouldn’t you say? For the first time we put in a bed of garlic. Some bulbs in and some bulbs, like the dahlias, out. Gardening is endlessly fascinating. And time consuming. I hope to have more time to write now that the outside stuff is getting wrapped up.

Last, but not least, I have been industriously starting a small book selling business. I signed up to become an Usborne consultant and am still learning the ropes. So far the most rewarding thing has been to be able to send really nice books to refugee children in Iraq. I also was thrilled to get our church school a lot of free merchandise through a book show.  I genuinely like connecting anybody to a source of educational books like these. Someday I will do a whole post on this topic. I have been having a blast with this, especially when the boxes of books come and I can sort out orders and stroke the covers (I know. I have a problem. But it isn’t a bad problem.) But there. The final and biggest reason why I have not been writing. I am still figuring out how to fit this business, not into every crack of spare time, but into reasonable hours. My children don’t mind. They drool over the catalog and revel in all the new books! I am systematically turning them all into bibliophiles (That’s not a bad thing either. After the dishes are done.).

Gabe is back on an evening schedule, which means he will be home around midnight. It has been a pleasure chatting with you kind folks while I wait up for him.

6 thoughts on “What Have I Been Doing?”