I have seen people who seem to think the world is a flower garden in which they can bumble around and take indiscriminate sips of nectar wherever they please. This is rather common among those who were raised like I described yesterday, who felt stonewalled in a system and were not taught to be discerning. When they leave the “protection” of the system, they run willy-nilly, trying to make up for lost time. 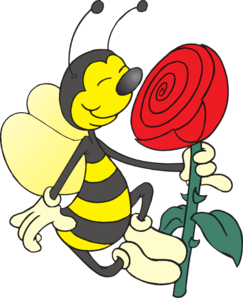 I think we all agree that the world is a sorry, broken place, not at all an innocent riot of pansies and sweet peas. The spirits that govern the world are not righteous. They are evil. Yet we are in it. We need a way to navigate some very murky waters, a way that does not involve joining a cloistered monastery. If we live mindlessly as though nothing matters, we are staking everything on that nonchalance.

(I personally have disdain for the “art” in pop culture. Here is just one line from the song “Dark Horse”. “She will eat your heart out, like Jeffrey Dahmer.” Seriously. How can anyone hear that and think, “Wow, what creativity!”? I pick on Katy Perry because of the internet storm over her recent half time show during the Super Bowl. Honestly, I didn’t know anything about her until I googled her lyrics and read them in utter disbelief. This. is art??? Actually, I don’t even know who played in the Super Bowl. Because I just don’t care. I credit that upbringing of mine, in which I was not taught to worship the idols of sports. 🙂 I wouldn’t feel wicked watching the Super Bowl, but it has never seemed important enough to get in a bother about. But I digress…)

My husband and I have had many discussions about how we want to raise our children. It looks different from how we were raised in some ways because the world is a very different place. For example, as a child I didn’t watch any movies at all. We did other things, like play games and read. Now we often supplement our homeschool with documentaries. We have no qualms about that or even the occasional comedy. Disney? Nope. Afraid not, kids. There is a lot of glitzy stuff… a lot of grey borderline… a lot of sweet poison. Instead of  Rules That Never Change, we need values that are ageless, don’t we?

John, the Beloved Apostle said this, “Do not believe every spirit, but test the spirits to see whether they are from God, for many false prophets have gone out into the world.”  1 John 4:1 Then we have it again in 1 Thessalonians 5:21 from Paul, “…test everything; hold fast what is good.  Abstain from every form of evil. Now may the God of peace himself sanctify you completely, and may your whole spirit and soul and body be kept blameless at the coming of our Lord Jesus Christ.  He who calls you is faithful; he will surely do it.”

They wouldn’t have instructed us to test things if it weren’t possible to know the difference between good and evil. Notice that they didn’t say, “Let the preachers test things and then do what they say.” In fact, there were prophets telling them false things. This call to thoughtful decision-making is a personal responsibility for every Christian.

While a reactionary “If it is excruciating, God probably wants me to do it,” is a flawed premise upon which to base our decisions, we cannot argue with Jesus, who said this:

Right there we have it. We aren’t supposed to be apologetic when our choices look different from the normal in mainstream society. It isn’t something to be embarrassed about. When I read stories of hostages, I am astounded at how the human spirit can survive while living in hostile circumstances. Infuse that spirit with the spirit of God, surround it with darkness in an alien kingdom, and watch it shine!

(I feel a little bewildered as to how I got here from there. I will switch gears now. 🙂  )

2 thoughts on “Go Light Your World (Without Apology)”