I would so prefer outdoor stuff to the indoor grind. This past week I convinced the boys that they would probably rather clean the house than mow the lawn. So we switched. I trundled happily after the mower for about an hour. It was loud, blocked out all noise, and I just thought stuff to myself for the whole time. Well, every time I emptied the clippings bag, I could hear that the people inside the house were alive. There were some loud “discussions” about the proper way to clean a bathroom, and no, Gregory did not nail it quite. But I pulled weeds on the walkway and out beside the picket fence and just let them work it out. Then I put away all the garden tools and a bunch of stakes that had a brief life as spears in a throwing contest. When the lawn was all nice and neat, I checked up on their work and was thrilled to see that all the biggest messes were cleaned up, floors cleaned (after a fashion…. seeing as Greg used hand soap out of the dispenser to wash them) etc. etc.

I called everybody outside just to enjoy the gorgeous afternoon. Since school started two weeks ago, it has been noses to the textbooks, labored cursive, practice with forgotten math facts, and a few other not so fun things. Then the afternoons we tried hard to catch up with our regular chores. It made me cross and bothered. Ask Gabe. 🙂 I felt like Jack, the dull boy. And I know that I resembled the mother cat in Milo and Otis, who keeps resolving never to yell at her childr… “Milo! Get back here right now!” Why does that part in the movie always make my children snicker?

Anyway, on this particular afternoon, I was trying to think of something off-the-wall that we could do all together, since Gabe was working that night. The little guys were all climbing around in their favorite  Monkey Tree, fashioning make shift platform houses. It was approaching supper time and I had no idea what to feed the crew when I had a happy thought. “Hey, how would you guys like to eat supper in the Monkey Tree?” Oh, yeah, just like that I had my cool-mom status back.  🙂 I am a little embarrassed to admit that “supper” was Cocoa Pebbles served with milk in mugs. Like Alex observed, “At least they are made with real cocoa.” Wanna see?

I thought it was funny that we only had one spill in the tree, and who knows how many we would have had at the table, sitting properly with bowls?

We also had watermelon for dessert. I dared to pick the one in the garden. It was luscious. Just ask Addy. 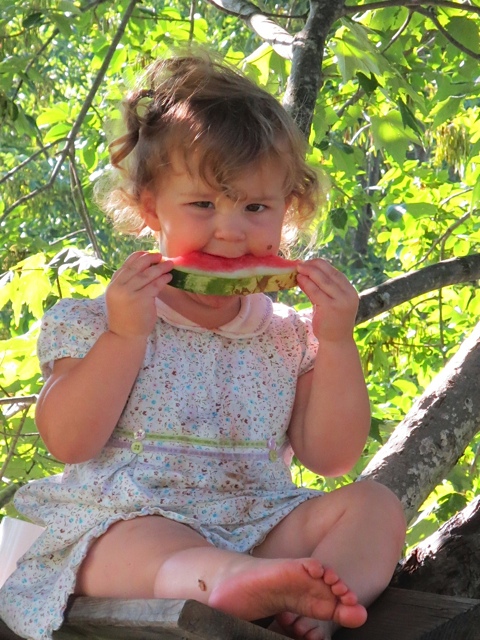 One thought on “In Which We Break Out”