I guess it wasn’t actually camping. Since my siblings have all procreated fairly steadily in the last decade, we have given up on rough camping. We found a cabin large enough to accommodate our needs and converged there. This post will be mainly pictures, for those of you who know my family and are interested. Apologies to anyone else.

Here we have my parents, affectionately known as Pops and Mama. We are so glad they fell in love a long long time ago. We are even more glad that they kept on loving and raised us in a happy home.

Here is a line up of the offspring. It appears that we have now exceeded the bounds of one photo frame, so I have it in two. You can splice them in your mind right there by the little blue boy. There are five boys and twelve girls. Lots of drama in this family!

I remember doing photo shoots like that when I was little. It was never as much fun for the children as the grownups. Oldest in our family is my brother Nate, who is turning 40 this year! Hi Nate! He and his wife are raising four lovely daughters. 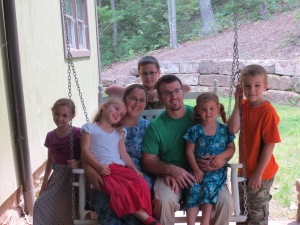 That’s Gabe and I with our crew in the second photo. Kenny is third in the line. We had the honor of meeting Jenica, the youngest of the entire crew, for the first time on this trip.

Last, but certainly not least, there is Rachel and her family. She is turning 35 this year. Yup, that’s right. My Mama had four babies in less than five years. It was probably a lot of work for her, but it sure was a blast for us. For some reason Nate and I used to refer to Kenny and Rachel as “the little children” despite the fact that they were right on our heels. Probably that is why Rachel resented it so much when we called her the baby of the family.

I have one photo that deserves a spot as the most delectable meal I have eaten in a long time. Kenny’s wife Carma served us this plate full of flavors that were just delightful. I can’t remember what it was called, but it involved chicken and mangoes and cilantro, among other ingredients. Isn’t it so purrrty?

It was great to get away for a few days and just visit and eat and eat and visit. You know how it goes. It is also quite a bit more relaxing now that the most of the children play nicely together. The older ones found a game that kept them occupied for hours and hours. And the little girls… well they just kind of trolled around being mostly sweet.

We are so blessed!