And here we are at March 12. I am not sure how that happened, but it is a month of life happening at amazing speeds. I love when things start livening up, when the sun puts out actual rays of warmth, and all the water outside turns liquid and starts to trickle to other places. On the last day of snow the children wanted one more sledding party before the great melt began. I did this (on a Saturday morning!!!) 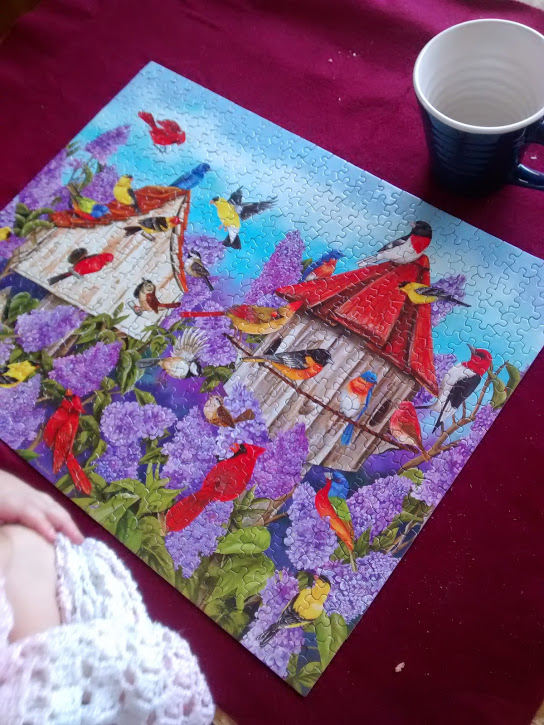 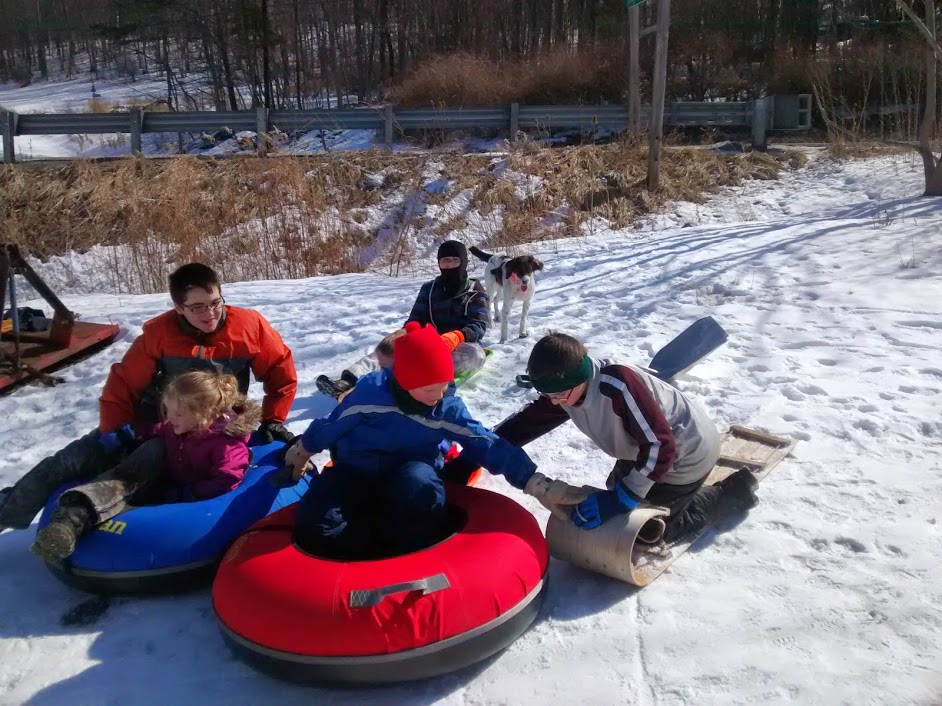 while they did this.

The thaw… It is such a glorious gift, disguised in a whole lot of mud, of course.

That is what I have been doing, I think. I have been taking care of mud. On the floors, on the coats, the snow boots, the insulated pants, the gloves, the… Well, I don’t mean to bore you. You are doing the same, no doubt. Just yesterday we were planning a little outing to Gabe’s sister’s house while he attended an Emergency Nurses Association meeting. The girls wanted to wear the new butterfly dresses. Rita’s got muddy before lunchtime when she took a little foray into the backyard. She ended up with a full scrub down in the tub, and I found a jumper with tulips on it for her. When it was time to load up the Suburban, the little girls took another (unauthorized) jaunt into the backyard. Addy fell, her dress and sweater became a ruin of brown smear and her face full of remorseful tears. When we got to my sister-in-law’s house, their over-eager puppy jumped up on everybody with muddy paws, so there we were again, but at least we tried.

I have been cleaning the mud on the dog here, too. She still has her crate in the basement to sleep. You know what dogs with silky medium length hair do when they come out of the wet, don’t you? “Oh, oh, oh,” said Jane. “Funny, funny Spot.” Only it isn’t funny when you are responsible to keep a semblance of order and cleanliness.

Speaking of the dog… Remember that research report that my son was laboring over? Well, she snitched it out of his desk and shredded it in an unguarded moment. That was a small earthquake in our household history! I did feel very sorry, seeing as he was on the third draft, with illustrations in his folder and everything neatly compiled, ready for the last draft. I felt so sorry that I told him he wouldn’t have to do it over, on one condition: he wasn’t allowed to storm about it anymore. That brought instant peace to the situation. We won’t have it to impress the evaluator this spring, but the dog ate it and that is that.

Another momentous occasion in recent local history was the felling of the backyard trees. A lot of our trees, both in the yard and the woods, are ash trees, and they are all dying. I am not so tree huggerish when I start seeing limbs falling after every storm and I see the leaves dropping already in July. Disgusting little ash borers. Gabe talked to different experts who all said the same thing. The ash trees will not recover. So. We cut them down. I mourn their 40 to 50 years of growth, all gone to smash in a five minute encounter with a  chain saw.  But. “You have to let them go, Sally Jane.” (And that quote is from Letting Swift River Go, not Dick and Jane. It is a great children’s story that deals with losses and changes.)

So the trees are down and what a tangle that made in the backyard! Rita built nests of sticks and blankets and lived out there for hours in the sunshine. She even got a little sun kissed on her nose. I washed all the blankets and little sleeping bags, and the next day she was at it again, only with a bigger stick pile to hold her off the ground better. I wish I had something she could hatch.

Gabe and the boys spent an entire day hauling firewood and brush out of the yard. While they were at it, the power line guy stopped in to talk about the trees and brush along the road, directly under the power lines. The last time they cleared that out I cried because that was my privacy fence. That was 12 years ago, and I guess I must have grown a bit since then, because I philosophically accepted the inevitable. “You have to let them go.” This one was a silver maple, leaning perilously toward the house in its declining years. I held my breath and prayed while he was sawing it down, but all went according to plan and the deck remained unsmashed. 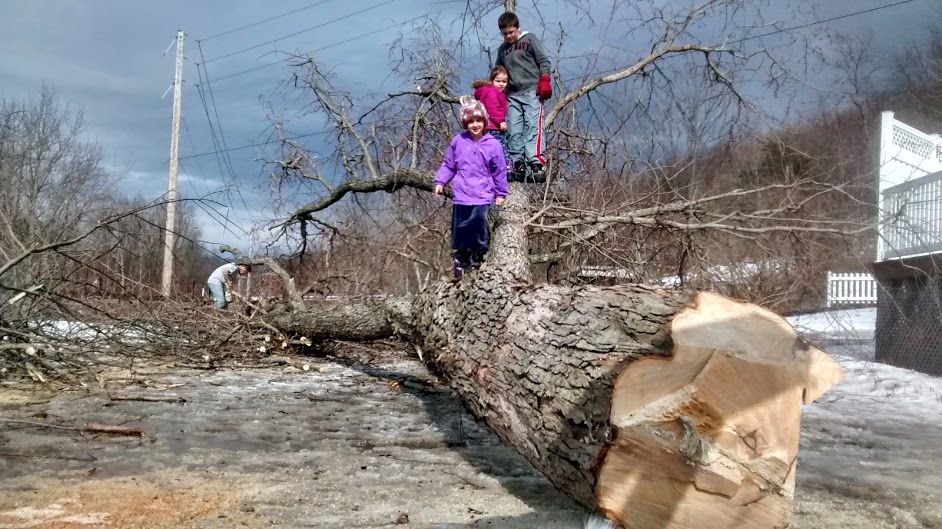 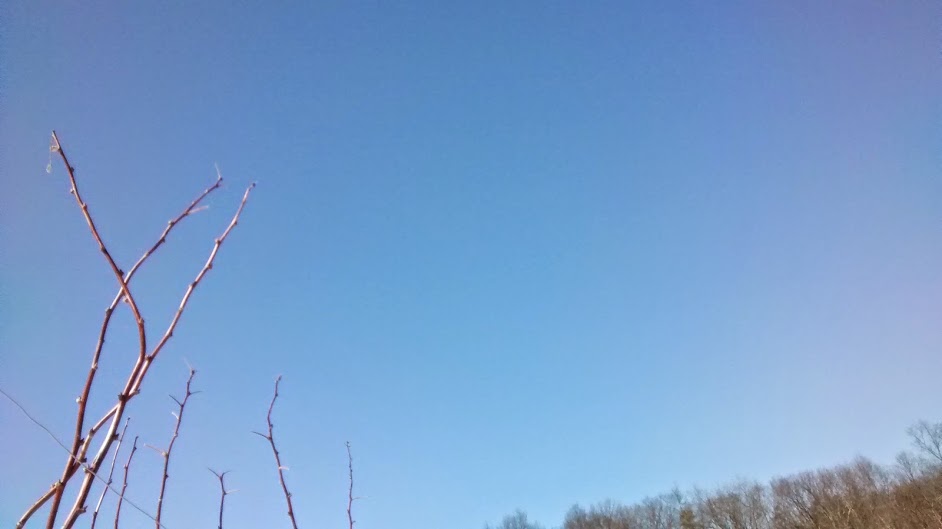 And this is how the sky looks, so I am happy.

4 thoughts on “I Blinked”