When we found out we were expecting Rita, whom I call Daisy or Maggie or MARGARITE ELISE by turns, I wasn’t sure I could possibly manage another child. I had still not recovered from the neediness of the first six months of a medically fragile child. Another one? I couldn’t face the prospect. Oh, please, please, please, God, I want a baby, just let her be healthy and happy, please, please, please. I did that for the whole pregnancy.

Rita slid into the world tranquilly, pink and round and undemanding. I fed her on schedule, changed her diaper, she fell serenely asleep on her own, asking for nothing until it was time for her next feeding. I could not get over the marvel of it. She was the perfect baby. 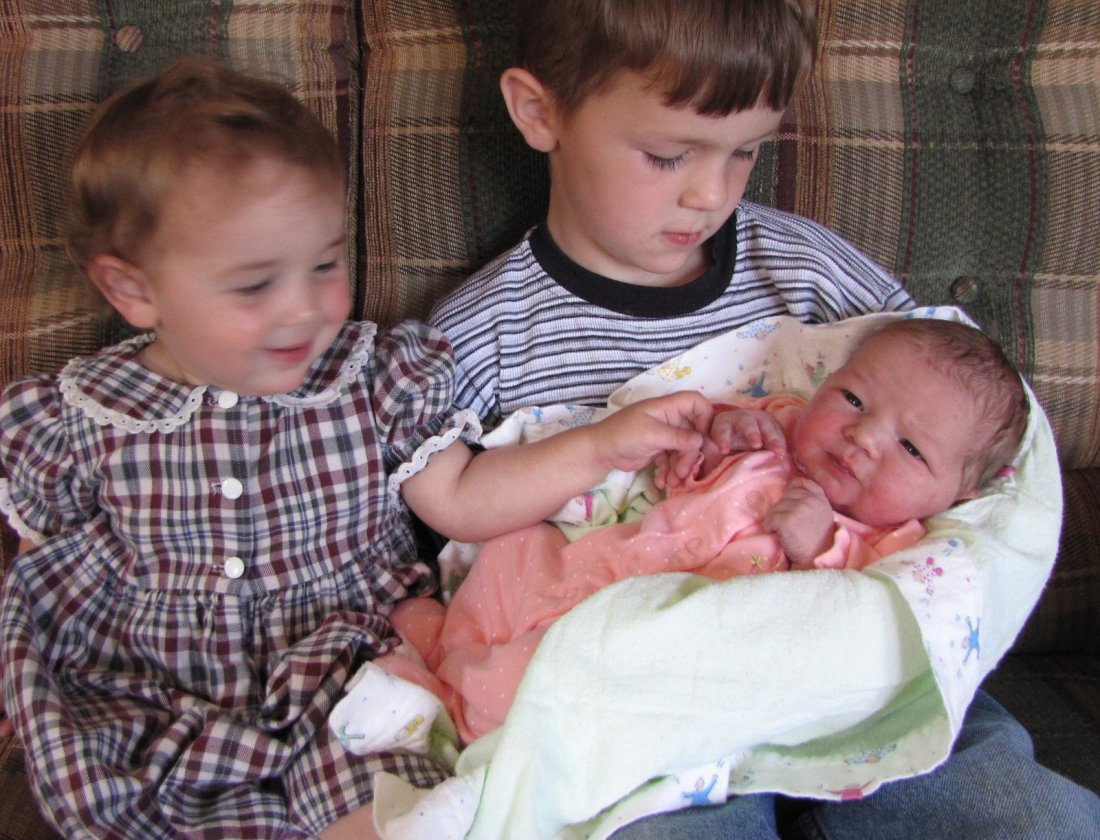 About the time she became mobile, we realized that God did not give us  just a healthy child; He smiled and gave us the most cheerfully self-reliant little girl He could dream up. When she was two, people actually pitied me. Life got a lot better for me and her both once I settled it in my mind that she was not trying to make things harder for me. She was trying to save me work by doing everything by herself. This included pouring her own milk and spilling the whole gallon. More than once. Then she helped mop the floor and spilled the bucket full of water too. She rarely whined about being hungry. Instead she learned to pry open the refrigerator, get a pack of hotdogs, then slit them open with a knife so she could have a snack. She ate the top tier of a birthday cake in construction and more hidden bars of chocolate than I could keep track of. She walked to the garden and casually picked a pepper for midday gnoshing.

One busy day before she was two, I found her sitting on the big potty. She had decided it was time to be done with diaper nonsense. There was nothing but disdain in her mind for the baby potty, even though she nearly fell into the toilet more than once. She thought she could run her own bath water and wash her own hair with quantities of shampoo. And she most certainly could get dressed by herself! When we told her she was too old for a binky, she sturdily threw it into the trash can and didn’t bother about it anymore.

She visited the neighbors all by herself when she was three, and scared the wits out of me when she put on her life vest and went swimming in the pond. When her hair bothered her, she cut it off, and if the cuffs on her dress were too snug, she cut them off too. She found the Sharpies and drew a bunch of pictures, also decorating my Bible. The child hadn’t heard of limits. Everything I never thought of making rules about, she discovered. More than once I prayed for God to help me keep her alive. It was not malicious, all that busyness, yet I am fairly certain that the majority of my white hairs are courtesy of Rita Who Was Three. The only safe course was to keep her right with me. Out of sight was trouble. But she was unfailingly cheerful and played for hours and hours with sticks and grasses and all the blooms off my rose bush and every single peony bud. To my knowledge, she has never complained of being bored.

When she turned five, she kicked the training wheels on her bike and persistently rode and crashed until she mastered it. She nurtured her own little garden plot and transplanted and watered her flowers to death. Her most favorite creative outlet is fabric scraps and threads. (You should see the unspeakable havoc of my embroidery flosses and my button box.)  “Look what I made,” she grinned, and showed me a pocket she had constructed with calico scraps, threading her needle and knotting it on her own. I never showed her how to sew a seam, but there it was, marching unsteadily up and down.

This morning it was time to clothe the pet ostrich. It has handy dandy wing slits, but she is embarrassed at how the hat turned out. I took a picture anyway because I thought it uncommonly clever. 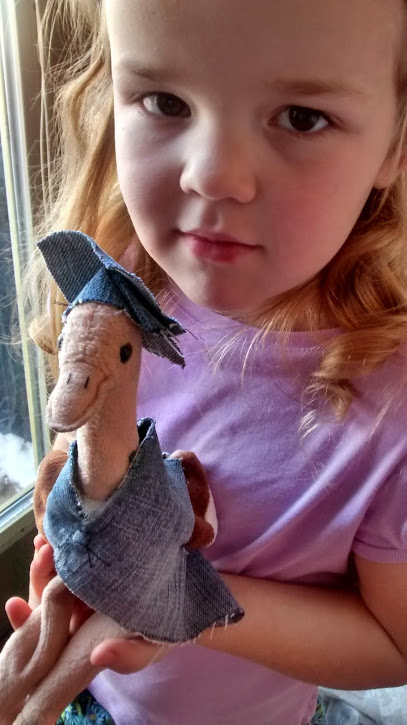 The moral of this story… well, there isn’t really a moral. But if you have a little child who is unceasingly, unbelievable busy, running circles around you -the concerned parent- just give it a few years. They will actually make your life easier sooner than you think. Those same clever little fingers getting into every pie will become cleverly useful. She can now wash windows and fold laundry and sweep floors when the right mood hits her. I expect to retire in a few years and let her run the house.

7 thoughts on “A Tale of a Little Girl”