“Oh, you horrid dog,” I exclaimed when she grabbed every weed in midair as I tossed it toward a compost pile. I looked at the yard, strewn with twiggy lavender branches and gigantic dandelions. Now we would have to rake it yet. “UGH! Gregory, go put Lady on the deck!” I ordered in exasperation.

“What did she even do?” he wanted to know. He’s always a softie when the dog is in trouble. I pointed wordlessly at the mess and he said, “You sure can’t take much, can you?”

That, from the child who was born by emergency C-section after his mother (me) had experienced 2 hours of exhausting and fruitless pushing and a transport to the nearest hospital because he (Gregory) was star-gazing in utero. I did not point out to him that his birth nearly killed me, but I thought it.

We were working on mulching the perennial beds. I had prepared these borders for mulch weeks ago, freeing them of weeds and waiting for an opportune time such as a day when my husband has off work with nothing better to do. Today I looked at the recurring carpet of fine weeds coming up, then I looked at the weather forecast, which is rainy, cloudy, rainy, rainy, rainy, for about as far ahead as can be seen. It was pay now or pay later, and I dislike carpets of weeds, so we (Gregory and I) hitched up the trailer and went for three scoops of mulch.

All my life we pronounced it “mulsh” like it was from some special pronunciation group. Then one day I heard yet another person say “mulch” with a “ch” at the end, and I got out the trusty dictionary. What do you know? They were right and I was wrong. I have been correcting my habit ever since, but my children think it sounds so affected and wrong. I said it as often as I could today, just to make Gregory splutter and to pay him back for laughing at me when I couldn’t back the trailer as well as I should have. “Mulch, mulch, mulch,” I said under my breath, just loudly enough for him to hear.

Before we mulched, I told Gregory to cut off the tulip leaves just because it looks so much cleaner. I know you aren’t supposed to do that, but I do it every year and so far they have always forgiven me and bloomed again. Daffodils aren’t quite so gracious, so we just doubled their leaves down and mulched on top. I transplanted some volunteer pink petunias and brought purple coneflower volunteers up from the edge of the garden.

Would you like to know what we did about that carpet of teeny weeds coming up? We have been saving up our empty cereal boxes for months for the purpose of  putting them under the mulch. Gregory and I decided that it lends a sort of nobility to eating cereal at breakfast, what with the repurposing and all. We made sure the words were on the bottom so that if the mulch happens to shift, you can’t see how many Marshmallow Mateys we have eaten.

Every year I have trouble with plants dying out in my perennial border. A friend suggested that it may be because it is right along the picket fence by the road where the snow plows throw in the salt. It makes sense to me. I just keep experimenting with different things to see what can tolerate those conditions. So far purple coneflower has done well, but all the black-eyed susans croaked. The daylilies are okay and the yarrow is spreading out of all reason. My favorite peonies are flourishing, but the peppermint tea at the end is not happy at all. Not to worry, it’s what I love about gardening… so much scope for imagination! Gabe thinks it is weird how I like to move plants around. Why not plant it where you want it and then leave it there for always? I don’t know why not; it’s just not how I roll when I garden. It is so much fun to dig up a clump of roots, divide it, and rearrange the environment.

After a few hours of steady off-loading with a scoop shovel, I was pretty hungry. Olivia brought me a baked sweet potato with a sprinkling of cinnamon on it. I ate it without taking off my gardening gloves, peppering it with some tiny bits of mulch. Gregory felt the tug of all the cereal boxes and disappeared for the space of a bowl of Chex.

At seven o’clock the predicted rain started to sprinkle down on us. We had one-fourth of our load on the trailer yet. I speeded up and the jokes stopped. Gregory pushed the last mulch into a pile and put away the shovels while I drove the Suburban down the hill to park the trailer beside the barn. Right then I decided I couldn’t face turning, backing, turning, backing, nearly jack-knifing, etc. As he came to help me unhook the trailer, I told him we are just going to let it sit until tomorrow, and I plodded up to the house in the drizzle.

“Are you seriously that beat?” he asked. This, from the boy who took bathroom breaks and snack breaks and cardboard-shield-making breaks while I plodded doggedly along.

“I am just about dead,” I admitted. But guess what? It is raining steadily and I am feeling pretty good. Of course, it doesn’t hurt that the ibuprofen has taken hold.

And for one parting shot: This is Mother’s Day, in the evening, when I suddenly remembered that we had not taken our annual photo because we left for a choir program at 6 AM. A Hallmark photo it is not, but it reminds me that a mother’s best defense against the erosions of time and reason is maintaining a sense of humor. Seriously. 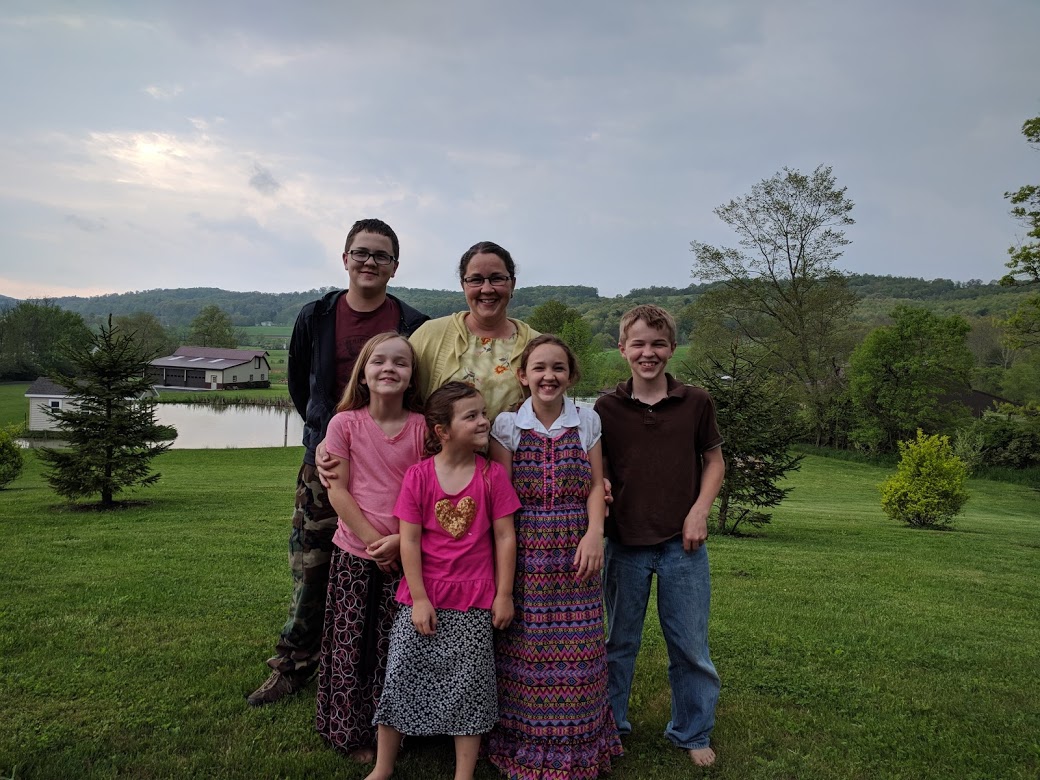