Although it doesn’t feel necessary at all yet, we are battening down the hatches here despite the August-like feel in the middle of the days. In landlocked, rural PA, that means clearing out the gardens, planting garlic, digging sweet potatoes, maybe nurturing some lettuce in homemade cold frames.  The pigs have been set to plowing the garden, where they clearly enjoy their privileges among the dried bean stalks and tired zinnias. The black pig, Petunia, is supposed to “piggle” as we jokingly call it, but she just doesn’t have babies. I am thinking she is even looking slimmer recently, so who knows? Maybe her relationship with Brutus is platonic.

The zinnia blooms that persist are still a-flit with monarch butterflies that should be hurrying south. We all feel a little confused by fall this year. There is no color. It’s still green here, folks. The leaves that have dropped are tan, brown, or speckled with a tinge of orange, but no brilliance. It’s an odd result of a very wet summer/abundant chlorophyll and unseasonably warm temperatures, the experts say.

This fall for the first time ever we wound our way through a corn maze, shot small pumpkins with a sling-shot, played corn hole and pumpkin checkers, and had fun in general. 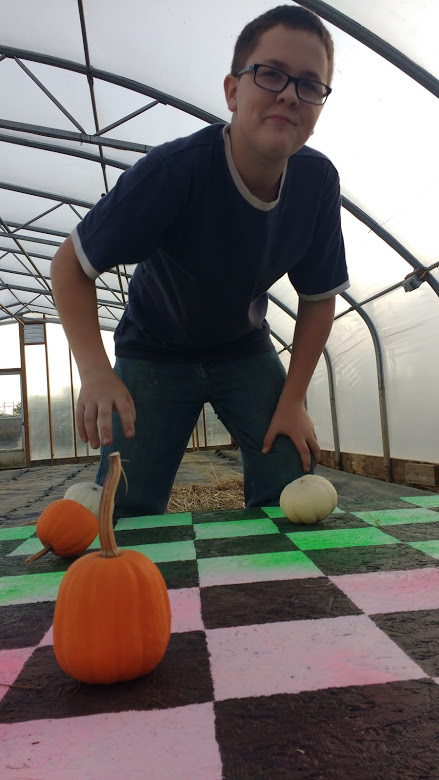 I feel the urge to clear out all the spider webs in my house, but it is a futile effort because the spiders keep diligently moving in. They aren’t fooled by unseasonable warmth. Also the stink bugs– I don’t even know if they have another more formal name, but they don’t deserve it if they do. I vacuumed 17 of them off my bedroom curtain one day. They seemed surprised and emanated their cilantro stench so strongly I smelled them every time I vacuumed for a long time afterward.

The vacuum cleaner smells like moth ball crystals at the moment. “What’s that sweet stink?” Rita asked. Upon investigation, I found that someone had spilled them in the closet after they did their sweet-stink duty in keeping yellow jackets away from our applesauce production out on the deck.

We live in deep apple territory. It’s amazing! We go to the orchard and walk along the apple crates on the porch, sometimes with as many as ten varieties of irregulars that are so cheap you can’t let them there. Then I remember what a friend who lived in the orchards said about the sprays, so I soak the apples in a white vinegar/water solution before cooking them. Whether this actually works to remove all the pesticides is open to debate, but it makes me feel better. I did the math this year to see if applesauce making is worth the effort. At Aldi, a pint of applesauce was 1.29. That’s 2.60 per quart. We did 55 quarts this fall. That’s $143 at Aldi. The apples cost us $45. Okay, so we saved $100 with just four hours of mildly strenuous effort. Even with overhead costs, a concept I just explained to Gregory this morning in his math lesson, I know it’s worth making applesauce. Also it counts as a school day, so we’re definitely in the clear here.

I am waiting for the Granny Smiths to be picked so that I can make real apple dumplings. Have you ever had them? The combination of mouth-puckering sour with flaky pastry and buttery syrup? Ohh, I sigh with delight at the thought. Once, and only once, I used whole wheat pie and pastry flour to healthify them. It was a fail that I will not repeat. If you need to healthify your apples, just eat them raw.

The boys have been working on painting the barn doors, which ended being constructed of raw wood after someone stole a pile of weathered red siding boards that would have become doors. The boys have also been making it their mission to get rid of the rats that have moved into the barn. (Shut your ears if you are squeamish.) Gregory has a string stretched between two small trees where he hangs his trophies by the tail. The count is holding at three, but there is a really big one they call Templeton that defies all their ingenious traps and steals the corn anyway.

In other news, we just finished our first quarter of school. Shew! One day at a time, they say, and they are right. The days pile up like sand in an hour glass and one day they will be all filtered through and we will understand percentages and fractions and phonics rules and it will be spring!

Gabriel is now exactly 6/11 of the way to his bachelor’s degree. He perseveres on through much trudging and some very boring assignments, to my way of thinking.

Our read-aloud book at the moment is Girl From Yamhill, Beverly Cleary’s memoir which was printed at least 20 years ago, but has seen a renewed circulation since she celebrated her 100th birthday. We love Beverly Cleary with her Klickitat Street, Henry and Ribsy, Beezus and Ramona, and a host of other unforgettable characters. The book is written about her childhood with an adult viewpoint, so there are occasional passages I edit for my small children’s sake. Our favorite line so far is her description of fourth grade: “one long quest to find the lowest common denominator.”

There isn’t a good way to conclude this kind of post, so I leave you with Addy’s Quote of the Day, after she was reprimanded by a sibling for her loud singing in the car.

“When I grow up, I am going to hum for people. For a living.”

2 thoughts on “Move Over, October”