Every day brilliant sunshine, and this year the rains have come at precise intervals to keep the greens vibrant. On the farmlet there is a bit of a lull as we take a moment to appreciate how having access to animal poo and straw has changed the gardening scene. There is very little hoeing and tilling going on because the weeds are stifled under mulch that the chickens have already sifted for all seeds. The entire garden has been fenced off so that they stay out of it. We wait for the tomatoes to redden and we pick the cucumbers as soon as they are sliceable. You may notice in the photo below that there is a trellis for the cucumbers, but they are not having it and sitting sulkily at the bottom. I don’t know what is up with them, but at least the Black-eyed Susan vine is flourishing. We have just enough produce to spruce up our meals with freshness. Along the front where my boys put up a picket fence with scraps of barn battens, the dahlias are just bursting open in crimson and pink and yellow. The girls bring in sturdy zinnias, gripped and wrenched off their tough stalks by small hands that never seem to have a scissors when they need it. The only harvesting I am doing is blackberry picking, but they are thornless and such a pleasure, dripping warm, dead ripe in the sunshine. The squash already succumbed to the enemy beetles. Oh yes, the green beans are just ramping up to do their abundant green bean thing. I did not replant the two rows that died with some inexplicable disease, and yet it looks like there will be plenty for the year’s supply in the freezer. 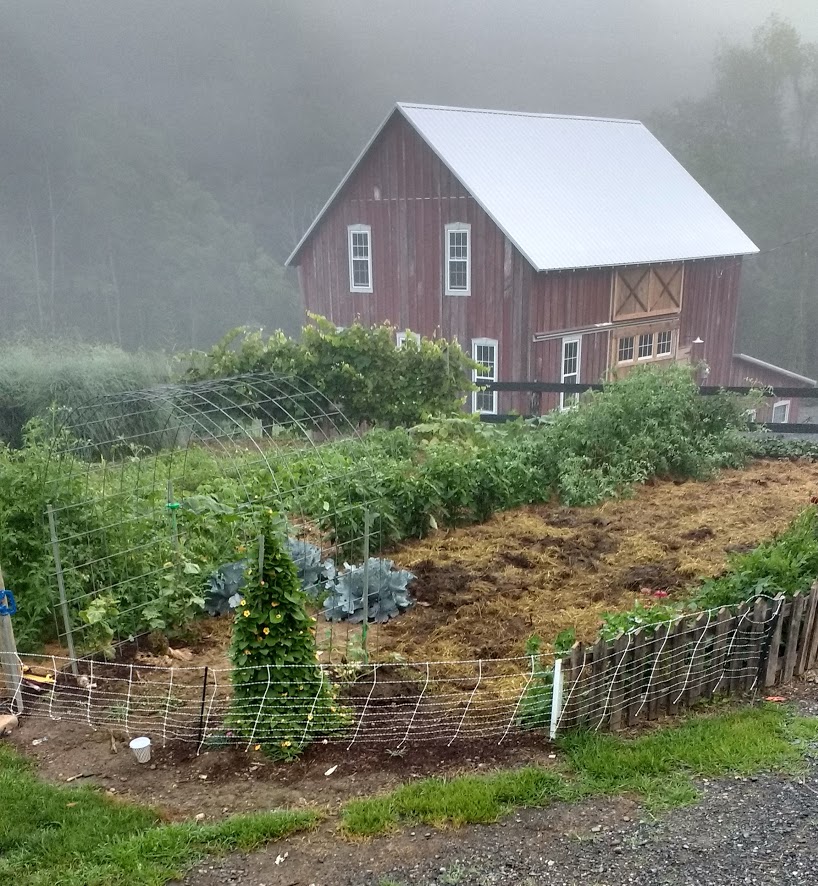 In July we celebrate both Gabe and AddyMaddy (I call her this, because she is such a madcap child, but it really is an endearment). Addy is 6 now, and no longer “too low” to do all the things she wants so passionately to do. She got a kitty for her birthday, something that she can lavish her kindness on. 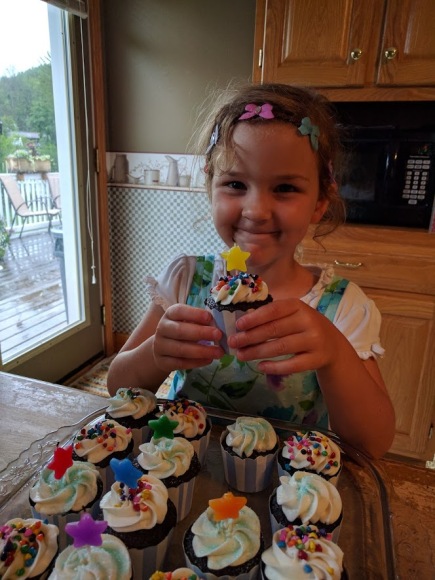 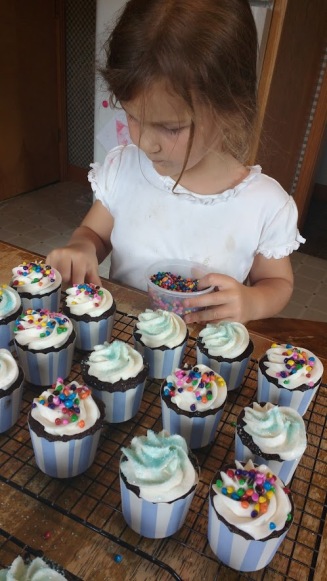 One weekend we went to a family reunion in Ohio where we sat around in limp lawn chair circles under relentless humidity. It was too hot for the crowd to eat baked beans, so I gave the leftovers from my crockpot to the pigs when we got home. On that journey, we spent a few days with my sister’s family. They built their house big enough to host a crowd; when we come it feels like it opens its arms and gathers us in. I would love to have that sort of hospitable space sometime, but I don’t know if I could keep up with the cleaning. We touristed in Holmes County with them one day, where we could taste over 40 varieties of cheese at Heini’s Cheese House and then we checked out an Amish petting zoo where my girlies acted just like all the other little tourists and begged for $5 horse rides around a ring. We also wandered the aisles in the wonderful Zincks of Berlin fabric store. Cheese and fabric. What else is there? Well, one could mention coffee.

I worked at some huge household projects in the past month. The bathroom cupboards were my paint project guinea pigs, to see if I would have the stamina to tackle the kitchen cabinets. Someone said they would sell a kidney to hire a professional before they ever try painting cabinets again. After my experiment in the bathroom, I decided I won’t blow my whole summer with a paintbrush in hand, but I got a really fresh bathroom out of the deal. Sometimes I just go lock the door and stand in there when the rest of the house is a wreck. Actually, as all good mothers know, the bathroom is sanctuary. It’s perfectly acceptable to lock the door.

The deck boards were about 2 years overdue for a sealing job and finally I just did it. Last year my husband was building a barn and this year he is studying for his BSN, so I knew it was not going to happen unless I Little Red Hen it. It was a trying sort of thing that took me a week from pressure-wash to finished trimming. I felt quite cross a few times, especially when a half gallon of stain slipped out of my hands and splatted straight down before arcing into the air to an amazing distance. If you have noticed the paint spills in Richard Scarry’s books, it’s true: it really does splatter like that. But the satisfaction when it was done was what I was going for. 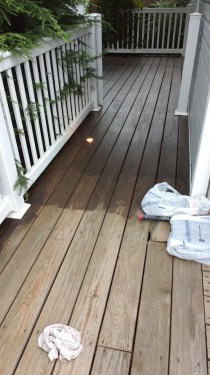 I am not investing in any of my chicken-scratched flower borders this year. The only things that survive the dust bathing and incessant pecking are the perennials, volunteer gourds, and the weeds. Last week I did an Instagram photo collage of the contrast between the flowers I take care of and the ones I have abandoned. Then I looked closely at the state of things and went out and tore out the gourds and the tallest weeds. At least I can do that much. The flowers in pots are at their peak, happily slurping up their weekly Miracle-gro potions and rewarding me with much for little. We spend a lot of time out there on the deck. Currently the girls are setting up a tea party right outside the window and Addy is weeping noisily because someone didn’t let her pour the tea. Not to worry, she will be warbling happily in a minute.

In this last week of July the sensation of freedom from flash cards, essays, and spelling tests has been replaced with a nagging sense that it would be wise to thoroughly clean the classroom from last term’s mess, even though the large boxes of text books are still stacked away in a corner of denial. I haven’t even cracked open one teacher’s guide. We are making one big change. After 4 years of DVD school for the middle graders, I feel ready to take back the classroom. I really love to teach. It’s the strain of balancing all the other house stuff with school that I dislike. We still have arithmetic courses that we will stream for 2nd and 4th grades because learning math facts is a huge deal for homeschoolers and without competition, flashcards and drills are a d.r.a.g. Can I get an amen?  But I get to teach all the language arts. Yippee! Alex has a grade 10 Biology course with an instructor, because Biology and I are not on friendly terms. I prefer just to let it happen, not study it.

I can’t help but cringe a little about August coming up, when everything yells and comes out to get me. It makes me feel panicky, not sure if I will make it.

I need some checks and balances in my life, because there is an endless array of things to do/learn/accomplish and I have a habit of flying high, then fizzling out when I run out of fuel. This is why I still am debating about getting a potter’s wheel, even though it is a lifelong dream and I even got to go to my friend Allison’s studio and play with her clay and make all the mess I wanted. I haven’t written my book either, because just as I was sure that I was supposed to do it, I lost three years of writing, and if that isn’t a sign, I don’t know what it is.

I have had recent conversations with friends that gave rise to conversations in my head. “What would I do all day if (1.) I wouldn’t garden, (2.) I wouldn’t homeschool my children, (3.) I wouldn’t clean or cook?” It sounds really appealing to the weary part of me that wants to just sleep and read and have cold drinks served to me while I sit in an Adirondack chair in the shade. Notice how unselfish that sounds? Closely related to this question is the obvious, “How can I simplify my TMH (Typical Mennonite Homemaker, aren’t I clever? 😀 ) life so that I actually feel like I am living it, not just skating through, taking precarious corners as fast as I can without wiping out?”

One day when I was frustrated with the endless pile of stuff that I need to do and the bucket list of dreams that seemed to be receding, my husband said, “You just can’t be everything.” In that one pithy observation, he helped me to quiet down and focus. I plan on writing a post with the questions I ask myself when I am trying to decide what in the world to tackle first. At least I hope it bubbles up to the top of the pot insistently enough to write it soon. Not making any promises, because August comes tomorrow.

Meanwhile, back at the farmlet…

I look at the railings swathed with wet beach towels. We have flip-flop tan lines on our feet and farmer’s tan lines on our arms. Occasionally we take time to fish or hike or bike long distances. There are homemade popsicles in the freezer because I got so tired of wooden popsicle sticks and plastic pop-ice wrappers laying around. I want a magic bullet to train children to have the class to walk to a trash can without first offering me the privilege of holding their empty wrapper. We eat cold lunches, lettuce sandwiches, banana soup with graham crackers, lots and lots of peanut butter. I make cold-brew coffee by the gallon.

At dusk the mosquitos emerge and the swallows swoop over the pasture for bedtime snacks. There are abundant honeybees in the clover and occasional wails of grief when a barefooted child steps on one. Japanese beetles devour the blackberries, but we pick the beetles off and feed them to the fish. The rain showers are warm enough for children to dance through the gushing runoff of the downspouts.

So much happy, yellow sunshine.

What have you been doing with yourself this summer? Did it make you happy? Do you think it is important to feel happy, by the way?

Catch you up later!

11 thoughts on “July On the Farmlet”