Like way, way simplified. A while ago I posted a recipe that I used to make yogurt. Then I had a couple more children and life got more hectic and I didn’t have time to mess with gelatin and powdered milk. I learned a way to make it that takes one ingredient. Milk. Well, that and a starter culture from the last batch of yogurt.

When my husband was sick about three years ago, we briefly tried the Specific Carbohydrate Diet, which he hated, but at any rate, I learned the only-milk method of making yogurt. (It had to be fermented/incubated 24 hours, after which the yogurt bacilli supposedly had devoured the milk sugars and left behind a product very gut healthy.)

Anyhow, here is what I do. I start with a gallon of milk, heating it slowly in a large kettle over low heat. I like to do this while I am working in the kitchen anyway, so that I can give it a stir every couple minutes. You do not want the milk to scorch.

I heat the milk to 180 degrees, F. This changes the milk proteins so they don’t curdle in the fermentation process. Then I set it aside to cool, giving it an occasional stir. A gallon of milk takes a while to cool. You want it to be about 115 degrees F. so that it doesn’t kill the yogurt culture.

If I don’t have any plain yogurt in the fridge from the last batch I made, I buy a good quality plain yogurt, making sure it contains live cultures (look on the label) and added acidophilus is even better. Once the milk reaches 115 degrees, I whisk 1 to 1 1/2 cup plain yogurt into an equal amount of milk. This helps to thin it so that it mixes easily with the rest of the milk.

I pour the mixture into quart jars, screw on lids, and set them into the oven with the light on overnight. (Shut the oven door, of course. This keeps the oven at a nice cozy temperature, just right for fermentation.) Usually after 12 hours the yogurt has thickened nicely. Plain yogurt, easy, peasy. 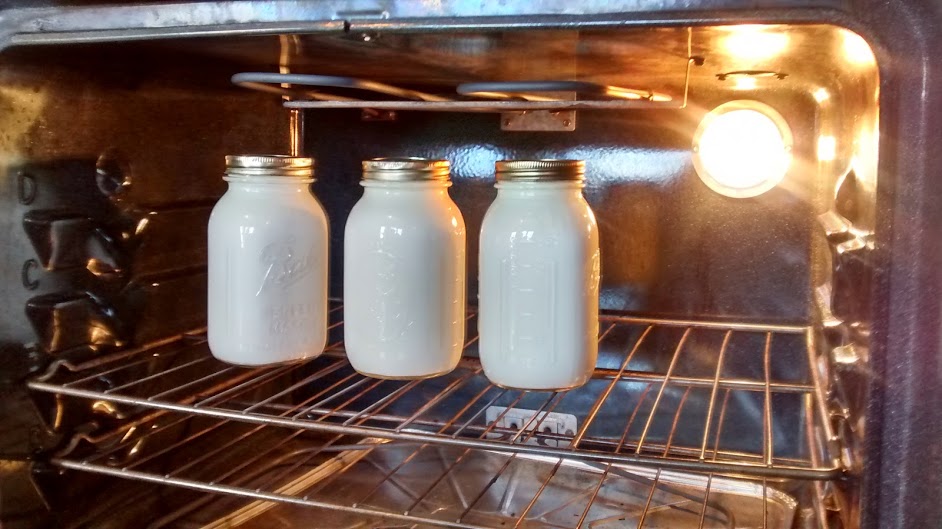 Greek yogurt… that pricey stuff… is just one step away. Turns out it is more expensive because it is only half of what gets made into yogurt, and all you have to do is drain the whey to get the same result.

I set a colander on a bowl, line it with a  thin cotton cloth (in my kitchen, this is the yogurt napkin, used only for this purpose 🙂 ) and pour the yogurt in to drain. If you leave it exactly four hours in the fridge, the yogurt will now be very, very pluggy. Less time will mean slightly more sour yogurt, more time will mean you need to stir some whey back in so you don’t have to cut your yogurt with a knife. :O

I lift the napkin and gently coax the yogurt into a bowl. It peels right off, usually half of what I had before it was drained. The other half is the whey, which you can use for whatever pleases you.

The last step is whisking the drained yogurt until it is smooth and happy. It only takes a minute, but makes your end product look really much like the Fage or Oikos that you buy at the grocery store. This gives me 2 quarts of yogurt from a gallon of milk at 2 dollars a gallon. Those little 6 ounce pots cost a dollar on sale. You do the math. 🙂

This is what my children think of the matter. With honey and peaches, of course.

(I have no idea why some of my photos turned out so small. I am choosing to think of it as a little mystery, and leaving for choir practice now.)