I have another shortcut to misery all ready, but on a drizzly, grey day, who needs that? We need to focus on how to be happy, yes?

There is a sweet, humming sound in my laundry room this morning. I keep tilting my head, listening to make sure it is still going along all right. Thanks to my husband’s skill in ordering and installing the right part from a system that is, at best, user surly, we have a washer again. I am grateful to not be schlepping baskets of dirty laundry to the neighbors or to my mom’s house. When we got married we bought a washer and dryer set at an auction for about forty dollars. They were already old when we got them, but lasted ten years with hardly  a hitch. We decided that we must have lucked out and gotten a durable brand, so when we needed a new one, that is what we looked for. Let’s just say we went to the big store that rhymes with gears. Gabe said, “You need a good one, a big one, a dependable one, so we are not going to buy cheap.” Okay by me, the one who always starts at the cheap end of the displays.

Three years later we had a washer that expired in a clunking of alarming engine noises. My resourceful husband had already taken it apart once to try to find the noise, but since it still worked, we kept using it until it didn’t work. Of course. The place that rhymes with gears said their repairman could come out on January 2nd. “What? You have got to be joking! I have 5 children and I cannot wait that long,” I protested weakly.

We started checking out local repairmen, all of whom were ever so helpful and friendly, but afraid to mess with a computerized appliance from “gears” because they do not give any tech support to non-company fixers. Finally we were able to find one who was willing to give it a try if we wouldn’t get mad at him should he be unable to fix the problem. Meanwhile, I called the company people and made my case a little stronger. This time I got Betty, “she’s the bomb,” and she pulled some strings, scheduled me a Company Man for the very next day. So we cancelled the friendly local guy.

The funny thing was, the man they sent out was the most garrulous person I ever met and he spilled the beans about quite a few things, including the fact that he isn’t very busy at all right now. He doesn’t know what the January 2nd date was all about. Tilting the washer up about 45 degrees, he looked underneath and immediately pronounced our transmission shot, maybe a few other things fried as well. It could run into a lot more repair bucks than the machine was worth, he has a bunch of coupons and if we decide to go buy a new one, just give them his number, yada-yada. He didn’t do anything with his tools except carry them in and out again after charging us a hefty little sum for diagnosing our problem. To be fair, he had called ahead and explained all charges and he was very kind and helpfully verbose. Particularly he thought I shouldn’t use so much detergent, even if it is formulated for high-e machines, even if it is packaged in a handy little pod. I have to admit to some incredulity, “You mean, you think that is what fried the transmission?”

Upon careful reflection and an inspection of the family budget, we decided that a repair would be smarter than buying new, only the repair would be done by my husband  now that we had been informed that it was not a computer problem. When Gabe ordered the part, they once more gave him that magical January 2nd date for shipping. We resigned ourselves to the inevitable and growled at the children every time they did superfluous changings of attire. The boys actually have no problem with wearing their clothes for a few days, but our girls do love to change outfits at least once a day.

Late last evening, UPS brought our part, Gabe promptly installed it, and now I can do my laundry again! It is only December 16 yet, so this is a gift! Can you see why I am happy after jumping through all those hoops? We have decided that, in future, we will buy new appliances locally, not because we carry any grudges against the friendly unhelpfulness of the big stores, but simply because we don’t like being lost in their shuffle and given dates that don’t mean anything. Also, we would like to keep the breed of small town owners alive, even if we have to pay more up-front, even if they don’t send out reams of coupons with their repair guys.

Moving on… We have a new baby at our house. A puppy baby, that is. She is sweet and waggy and might even turn me into a dog lover with her winsomeness. Gabe has dreamed of owning a spaniel for about most of his life. This fall we had started researching and looking at puppies with an eye to raising pups to sell. Our boys have wanted a puppy all of their lives, but we were always afraid of the road out front. There will have to be a kennel, and there is a lot of training involved, but spaniels are supposed to be extremely amiable and willing to obey. For now, there is a crate in the basement with a  puppy that is learning to only go potty outside.

I wasn’t going to allow even that much, but it is winter and spaniels don’t smell, etc, etc. 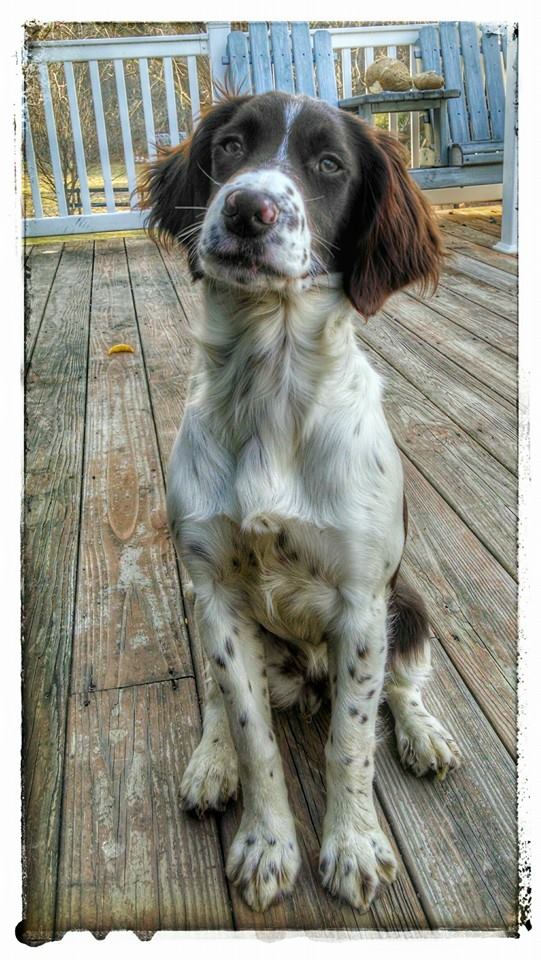 She is named Lady Gauge and we like her. May she enjoy a long life and flush many grouse and have many babies!

Some of you know about how I injured my knee while performing the arduous task of fishing some books out from under a dresser. As I twisted to stand up, something popped and I felt alarming pains that affected my walking for a few hours. With ice and elevation, the knee eventually was not painful unless I bent it. Gabe’s doctor friend said it was likely a tear and should be scanned sometime, but mainly I need to keep it braced and inactive. Hahaha, I said mirthlessly to myself. After 10 days in which I walked stiff legged and fantasized about curling up on the couch with my tea instead of extending my leg always into the cold, I am able to bend it carefully. It is healing, and that is happy too! I might add that the washer broke down at the optimal time, when I couldn’t run up and down the basement steps anyway.

Yesterday Rita wanted to ask the blessing at lunchtime. She started with a sweet thanks to Jesus “that I have a family and don’t have to live on the street…” Yes. That is right, little girl.

The boys are deep into codes and acronyms these days. I keep coming across papers with hieroglyphics of some sort or another, with alphabet decoders alongside. The acronyms are less obvious. “That was the MDM!” one of them will exclaim and when I look blank, they say, “Most Delicious Meal, of course.” Or I will hear an argument where one will insist, “I tell you, it is AT! AT!” I have discovered that AT means All True. Of course. Somehow the girls know that they should be insulted if they are referred to as “SLG”, or Silly Little Girl, as well as any other variation on the theme. I roll my inner eyes and laugh at the circus. Or I might say, “Okay, that is EA! Enough Already!”

We had a mega cookie baking spree one day, where each child picked a recipe and we baked it. Alex made rice crispy candy on his own and Greg did his own snicker doodles, but the girls still required a lot of supervision. I made a little mistake when I handed them a Taste of Home cookbook with pictures so they could choose their recipes. They chose things like Peppermint Pinwheels, Evergreen Sandwich Cookies (with two kinds of icing, no joke, although I declined to ice the tops with royal icing…) and Giant Spice Cookies (that look like cracked concrete according to Rita). The batches were small, and we gave a bunch away and ate a bunch and here we are, 10 days to Christmas and the cookies all gone.  Addy was crestfallen that she won’t even be able to share her kind with Cousin Jackie.  I am a sucker for sad eyes. Yesterday we made Evergreen Sandwich Cookies again.

In wintertime I challenge myself to do things that are inconvenient and require me to give up my personal space, just for love’s sake. After all, it would have been much easier for Jesus to stay in heaven, wouldn’t it? It isn’t that stuffing white socks with batting and making snowmen is so complicated. It is that it requires me to put out patience and long-suffering and time with a generous helping of hot glue and buttons. My children don’t know the difference between that and love that actually is costly. What they recognize is the camaraderie of life with a cheerful giver/mother. Incidentally, the Greek word for “cheerful” is the same root word as “hilarious,” a tidbit I remember from Bible School days. That is the catch, isn’t it, my friends… it isn’t the doing, it is the how they are done.

That is what I mean when I wish you a merry Christmas. I wish you joy in recognizing how extravagantly costly was the gift God gave when He sent His Son. Let’s live His lifestyle of extravagant giving of ourselves!